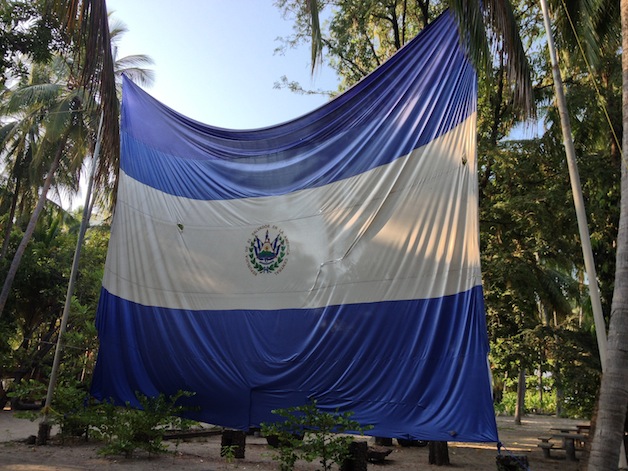 Thmpp! It’s hard to describe the sound of a perfectly ripe mango falling from a tree into the sand. Thmpp! There it is again. It’s the sound I have been waking up to for the past week here at La Tortuga Verde, a hotel-cum-turtle sanctuary on El Salvador’s Intipuca beach. 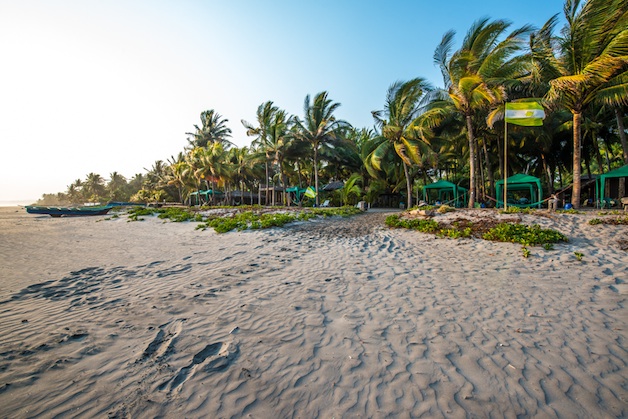 There are no windows in my room, only mosquito netting separates me from the mango trees, coconut palms (there are over 400 on the property), and what is supposedly one of the most dangerous countries in the world. I pick up a few soft mangos from the ground, wipe off the sand and make my way down to the beach on the other end of the property where the beach facing hammocks are perfect for my morning mango feast. There is a salty breeze and the low tide reveals a 200 meter wide and many miles long beach, the end on either side disappearing in the morning mist. I check the thatch covered construction on my right but it seems the turtle eggs kept here have still not hatched (they are a few days overdue already). Over at the outdoor kitchen counter I make myself a pot of fresh coffee and sit down for breakfast under a beach-facing marquee. 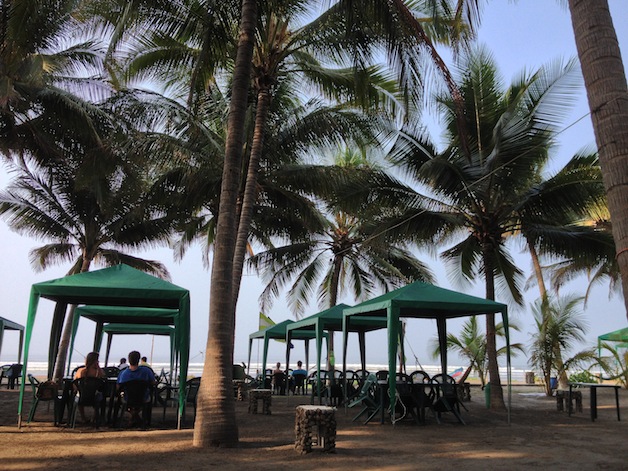 Enter Tom Pollak: with his long, sun-bleached hair, magnesium sunscreen on his face and bright rash guard he looks more like a native warrior ready for battle than hotel owner as he returns from surfing the nearby point break at Las Flores. 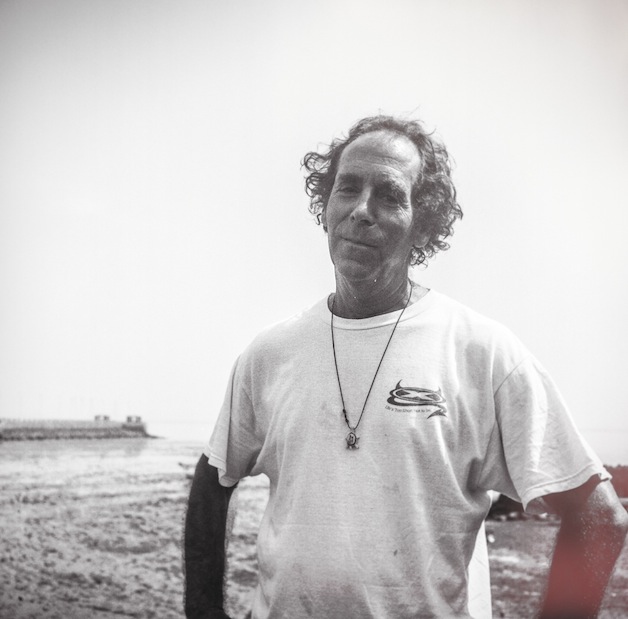 A native Californian, Tom has been surfing since he was 12 and over the years has perfected his cutbacks, top-turns and hang-tens to a level that leaves gommets staring with amazement. 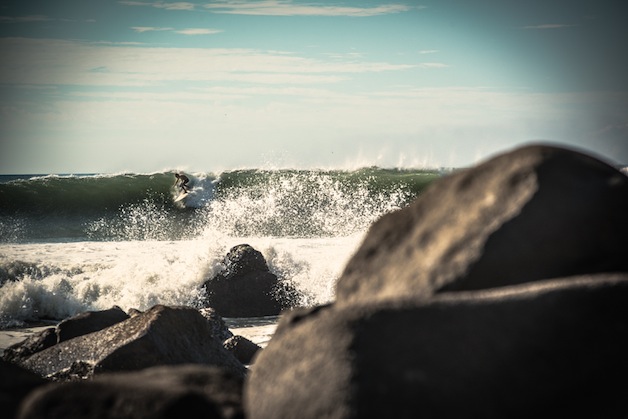 Tom in action. He caught this one, too.

If he’s not out surfing Tom is busy rescuing one-winged pelicans and saving sea turtles: the beach in front of La Tortuga Verde is popular with turtles laying eggs. Equally popular among locals, however, is digging out those eggs and selling them for consumption. I had never heard of people eating turtle eggs (nor could I have imaged it), but after Tom points it out, I keep noticing the signs advertising huevos de tortuga at local kiosks and small shops.

Tom actually buys eggs from the poachers as well, only for different reasons: he puts them into his vivero, a thatched construction on the beach, and once the turtles hatch, he makes sure they make it into the Pacific ocean safely. Over the years Tom has bought tens of thousands of eggs and saved hundreds of turtles (and rescued about a dozen or so pelicans) and he will not get tired of preaching his mantra, No comen huevos de tortuga! – Don’t eat turtle eggs!  – to locals, guests, and on his national TV show, Viajeros de El Salvador, something I am happy to support as well! 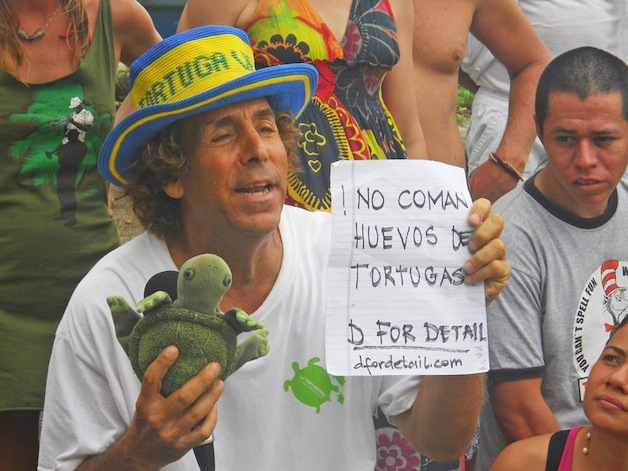 La Tortuga Verde has gained a reputation when it comes to preserving turtle eggs but this place is so much more than just that: it’s a place as eccentric, multi faceted and colourful as its owner. Decorated with antiques, curiosities, and local findings, from vintage rocking horses to little wooden boats dangling off the walls, it’s a playground as well as a hideaway. 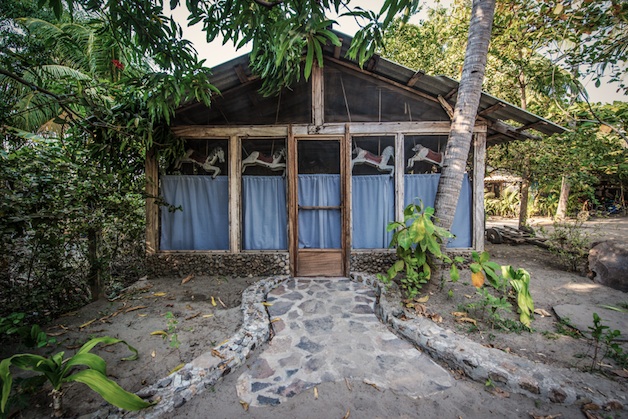 Tom is owner, general manager, concierge, driver, and chief of entertainment all in one. He’s always up to something and happy to take his guests along. One morning we hop onto his pick up to see the local fisherman and buy fresh fish, another day we take the lancha and embark on an All-Day-Open-Ocean-Adventure, one night we drive to a small town circus and on another night we visit nearby Loma Larga’s fiesta brava. Wherever he takes us I meet some of the friendliest people I have come across during my travels,curious and helpful, heartfelt and warm and (nearly) always smiling. 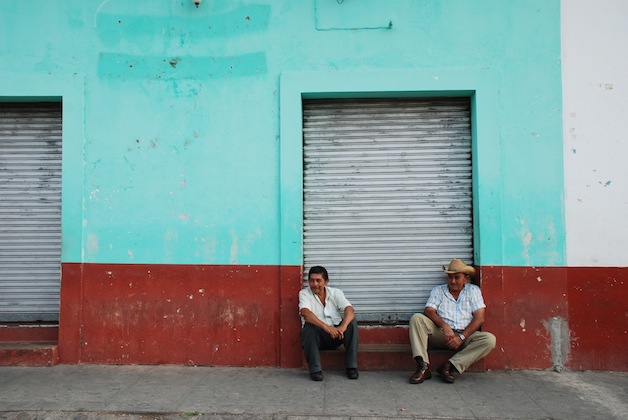 Initially I had been warned about coming to El Salvador, about how dangerous it would be, making it sound like Somalia or Mos Eisley, a crime-filled place ruled by machete swinging bandidos and armed gangs (which have been a problem in the past to be fair). My curiosity and contrary reports from fellow travellers, however, have led me here in the end and as it turns out El Salvador has become one of my favourite places in Central America. It’s hard to believe that this friendly country went through one of the most gruesome civil wars not too long ago.

I wandered the streets of “notorious” San Salvador, rode a motorbike through scarcely populated landscapes, had roadside pupusas with locals, walked the streets of La Union in the dark, hiked the hills around Suchitoto, took overland buses, taxis, and tuku-tuks and never once did I feel uncomfortable. All along I met amazing people, whether they were peasants, farmers or living legend Don Alejandro Coto, who gave me a personal tour of his house-turned-museum. 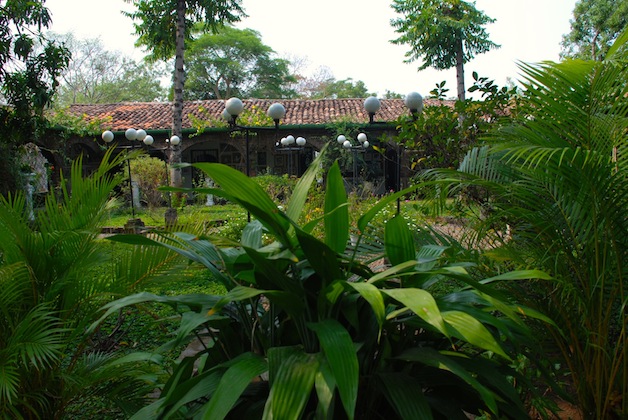 Make up your own mind, go visit, experience the country and it’s fabulous landscape, nature, and beaches, and most of all, it’s wonderful people. Just don’t eat turtle eggs!