a legend within a legend

I have slept in water towers, gunpowder factories, chateaus, and tree houses, but a monastery had been missing on my hotel bucket list so far. There are several former monasteries-cum-hotels, but probably only one can call itself a legend: Bienvenue au Sofitel Legend Santa Clara in Cartagena de Indias, Colombia. 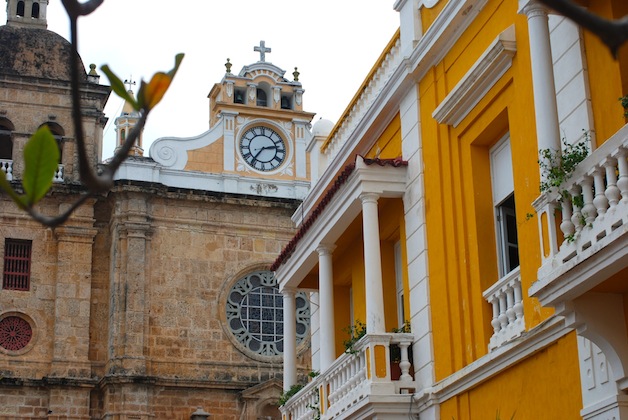 Cartagena, the Heroic City, Capital of the Caribbean, and Key to the West Indies. A cultural, economic and political hub, the city is a UNESCO World Heritage Site and supposedly one of the most beautiful colonial cities in the world; a legendary city that over the centuries was home to noble royalty and wealthy viceroys, attracted traders, conquistadores, and pirates, and inspired painters, artists, and poets from all parts of the globe. Most notably Hungarian poet Sandor Kanyádi who, in his poem Romance, describes his longing for the Caribbean pearl:

“[…]
I’d gladly exchange eternity
for one moment of your delights!
This love has made a fool of me,
A loving fool who sobbingly writes
About his fear he’ll never see
His love again, oh, Cartagena.”

Oh, Cartagena – I, too shall fall in love with you.

After a 40-hour passage from the Comarça de Kuna Yala in Panama onboard the Gitana III, our 65-foot ketch, once owned by the Rothschild family, we reached Cartagena in the early morning hours. The cruise from Panama had been quite rough and as I climb on deck the sky above is filled with thick clouds. The fresh morning breeze is a pleasant sensation on my face as my eyes wander along the city’s impressive skyline. Somewhere behind the skyscrapers lies Cartagena’s legendary Old Town, my final destination on this three-month trip through Central America. 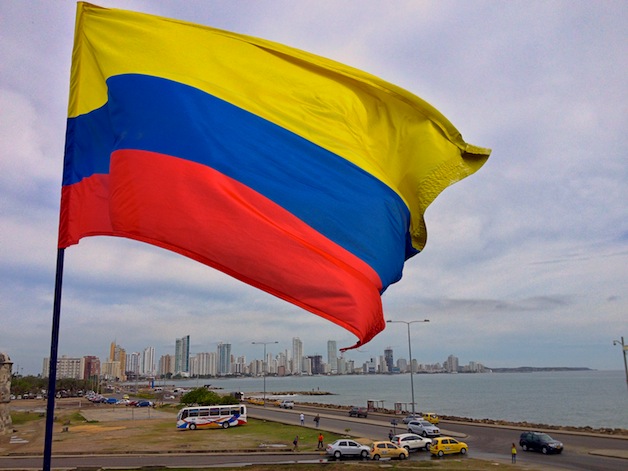 A short taxi ride from the port and I am driving along the malecon, with the calm Caribbean sea on the left and an immense fortified wall on my right, the occasional cannon peaking out. They are silent witnesses to the city’s illustrious past.We turn right and through an archway we enter the Old Town with its colonial balconies and republican buildings that evoke the splendour of bygone eras. 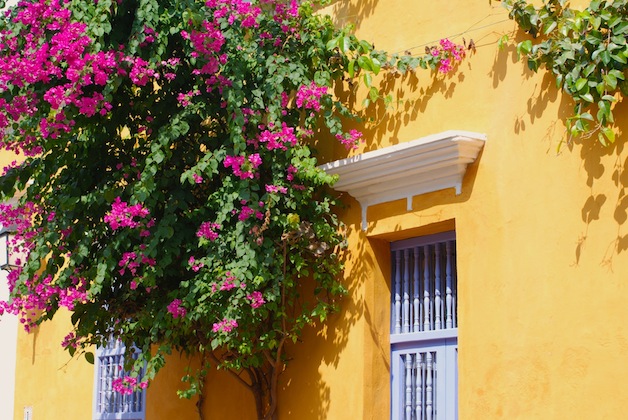 After a few lefts and rights through a labyrinth of colourful houses with even more colourful flowers we reach the Sofitel Legend Santa Clara. As the car door opens, the all too familiar Sofitel signature Bonjour, regardless in which country you are in, is the first French word I have heard in months. 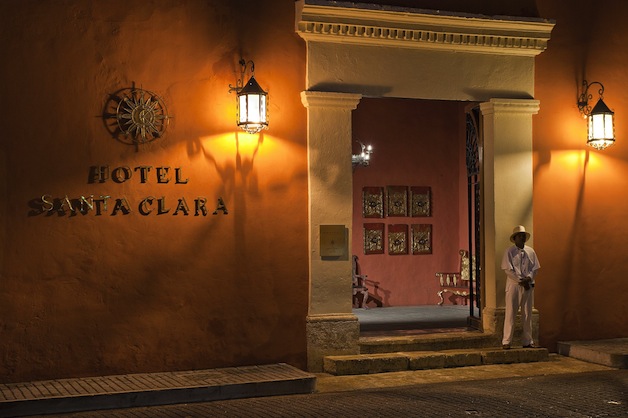 It’s a bold move calling yourself a Legend, a title Sofitel recently bestowed onto their most iconic properties, including the fabulous Sofitel Legend The Grand in Amsterdam, Netherlands, and the famous Sofitel Legend Hotel Metropole in Hanoi, Vietnam. However, as I enter the dark red building, which in 1621 served as a convent, it immediately becomes apparent what makes this one legendary. 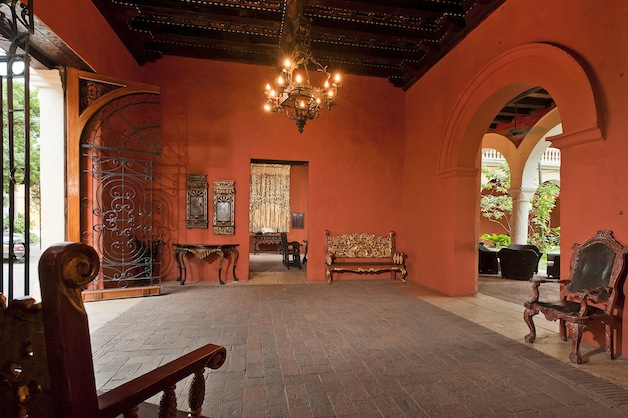 For over 240 years the Santa Clara Convent served as a monastery; it was both witness and victim to invasions and sieges and birthplace of many legends. After a government order forced the nuns to abandon it in 1861, the ancient Clarist cloister became host to a range of other institutions such as a penitentiary, a charity hospital and a school of medicine among others. Much neglect and desolation would eventually leave the building in ruins, almost beyond repair. By 1987 the abandoned property was offered for sale at a public auction where it was bought by a group of visionary Colombian investors who proposed to transform the convent into a hotel. 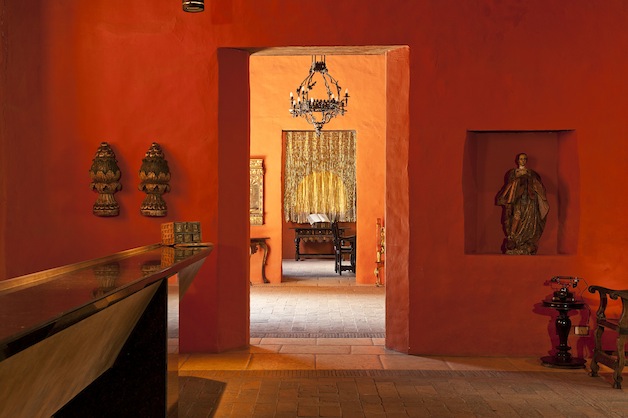 After extensive and meticulous renovations, combining colonial architecture with modern comfort, Colombian hospitality with French luxury, and blending vintage with contemporary, the old abandoned convent was converted into a luxury hotel bursting with history, magic and impressive anecdotes. 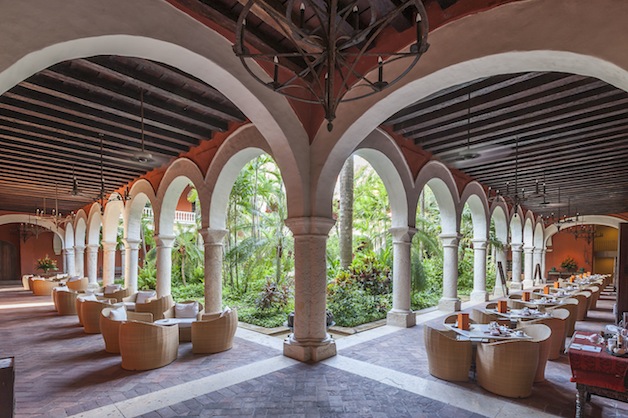 From the moment its doors first opened in 1995, the hotel has established itself as the country’s most important reference in the luxury hotel industry, an iconic landmark where Colombian history meets modern day luxuries. Whether it’s in one of the two restaurants, the fabulous 800 square meter So Spa or the stunning public areas filled with Botero status and home to the hotel’s resident Toucan: you are experiencing the best of Colombia here. 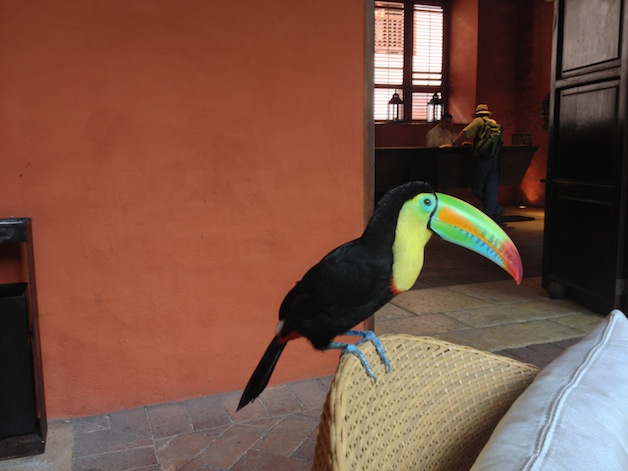 Guest rooms are either in a colonial or a republican wing, stylishly renovated and overlooking the Old Town, the Caribbean or the tranquil poolside and interior courtyards. 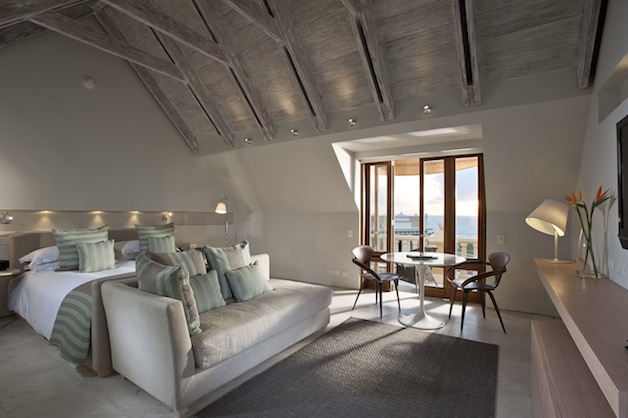 In short, this hotel is to fall in love with and a true legend. Like the fabulous city it’s in.