an expedition into egyptian hospitality – part 1: the pyramids

Egypt’s rich past has inspired endless researchers, artists and adventurers to set out and explore the country’s archeological treasures, monumental architecture and fascinating culture. Individual travel has steadily been on the rise ever since Thomas Cook started bringing British and American tourists to the pharaohs’ country in 1869, the birth date of the modern day package trip.

The most famous ‘business’ traveler to Egypt during that era happened to also be British: Howard Carter, who first visited the country in 1891 to assist during an expedition and who in 1922 made the legendary discovery he is so well known for: the tomb of 18th dynasty Egyptian pharaoh Tutankhamun, aka. King Tut.

Apart from the country’s legendary sites, Egypt has been best known for its hospitality, its people’s friendliness, their warmth and heartfelt smiles as they welcome guests to their country. Inspired by Carter I decided to embark on an expedition myself, but rather than searching for artifacts, I decided to research hospitality by visiting three very unique hotels, managed by three different international chains. My aim was to find out who can blend local Egyptian hospitality with their hotel chain’s respective corporate philosophy and national background best. For examination were hotels managed by an Indian (Oberoi), a Canadian (Four Seasons) and a German (Kempinski) hotel chain.

First stop: Cairo, the oldest capital in the world

I was warned about going to Cairo. I was told it would be chaotic, hectic, and loud. Most of all I was told traffic would be horrible (in fact several people told me it was the worst in the world). 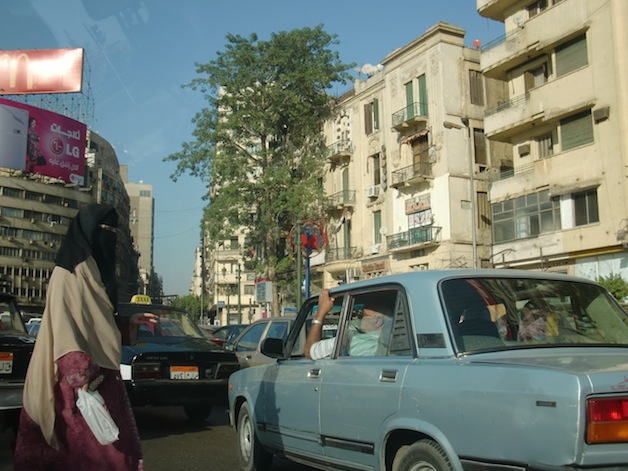 But why, I wonder, did nobody tell me how peaceful Cairo could equally be? How tranquil and quiet? And how fascinating the pyramids would be when you first see them?

Coming from the airport I arrived at the Mena House Oberoi, Cairo late at night by taxi. My flight had been delayed, it was dark, and I was tired. In my room I stepped out onto my terrace, gazing into the dark skies, knowing that the pyramids would be nearby but I couldn’t see a thing; nothing prepared me for the morning. After a heavenly sleep I opened my eyes to find the pyramids right outside my window, literally opposite the hotel, a proverbial stone’s throw away. Of course we all know what the pyramids look like, just like New York’s Statue of Liberty we have seen them so many times. But when you actually see these monumental rock piles live for the first time it’s very different.

I indulged into a fabulous breakfast on my terrace, soaking up the view before heading out to see the pyramids up close.  It is only then, when you stand right in front of them that you really learn to appreciate this achievement made over 4’500 years ago. The pyramids, the last remaining of the seven world wonders, are monumental and examining the construction makes you speechless (each of the three pyramids is made up of around 3 million cubes with an average individual weight of 2.5 tons but I am sure you know that). 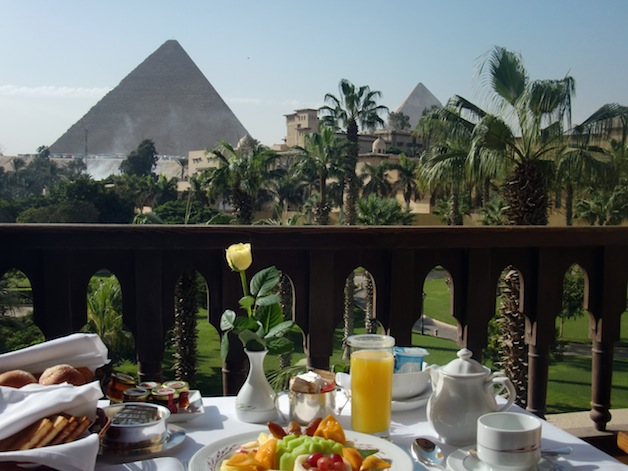 As with most famous sites, either go really early or rather late to avoid the peak times when hundreds of buses spit out camera waving tourists, who are then being whizzed passed locals offering camel rides and one dollar souvenirs to quickly see the pyramids and the great Sphinx. Instead, set your own agenda and walk at your own pace. Sit down in the shade of an ancient rock and reflect, set your mind free and let the pyramids work for you. Get inspired to achieve something great!

Later that afternoon I walked the 5 minutes back to the Mena House. Set in 40 acres of Jasmine scented gardens and originally built as a royal hunting lodge by the Egyptian Ruler Khedive Ismail in 1869, the Mena House is practically in the pyramids’ backyard and thus the perfect first base for any Cairo or Egypt trip. Following several enlargements it was christened Mena House only in the 1880s by it’s then owner, naming it after Menes of Memphis, the first Egyptian King and founder of the First Dynasty. It was at around this time that the Mena House was turned into a luxury hotel, the first in fact to offer open balconies, which were unknown at the time. An enlargement in the 1970s added the Garden Wing to the historic main building, now known as the Palace. I settled for a mint tea in the Palace, the Mena House’s historic heart. If you listen closely you can hear it beat and the walls talk to you, whispering names from a sheer endless celebrity guest list. Walking down the old hallways, magically illuminated by Arabesque lights, the playful contrasts of light and shade magically transport you back in time. At the end of one hallway, historical pictures offer a glimpse at the hotel’s rich history. 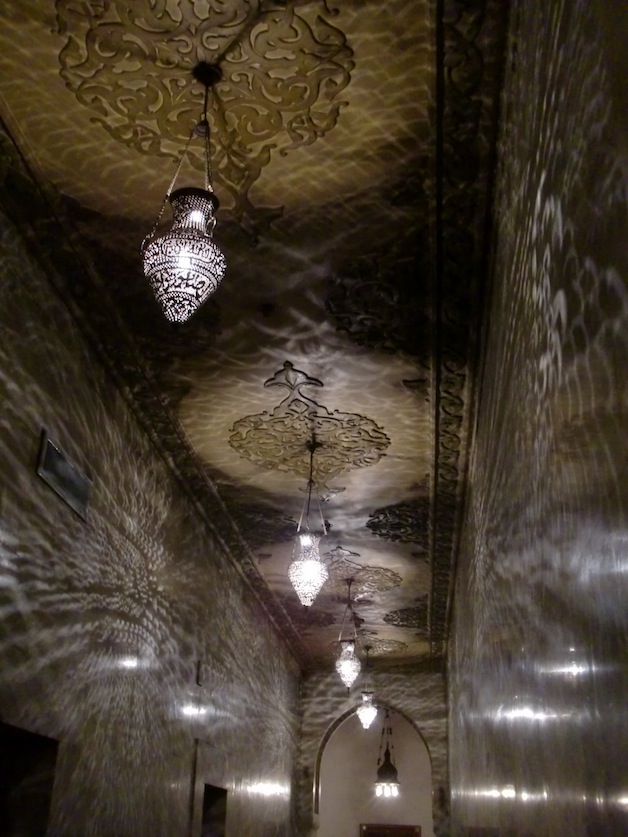 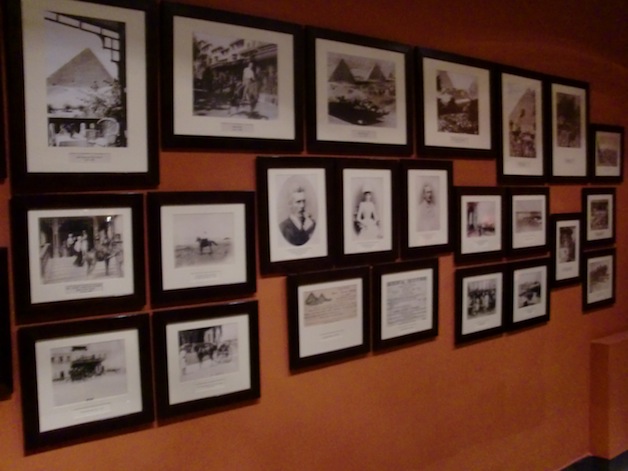 From the turn of the 18th century who-is-who to today’s celebrities to talks between Churchill and Roosevelt or the signing of the peace treaty between Egypt and Israel, the Mena House was the hot spot of the rich and famous and often set the stage for events the world looked upon. But time has taken its toll on the Palace and so Oberoi will be giving it a complete refurbishment as of June 2011. The newly refurbished Mena Garden, the annex built in the 1970s and home to the hotel’s 700 sqm Spa as well as two of the four restaurants will remain open. 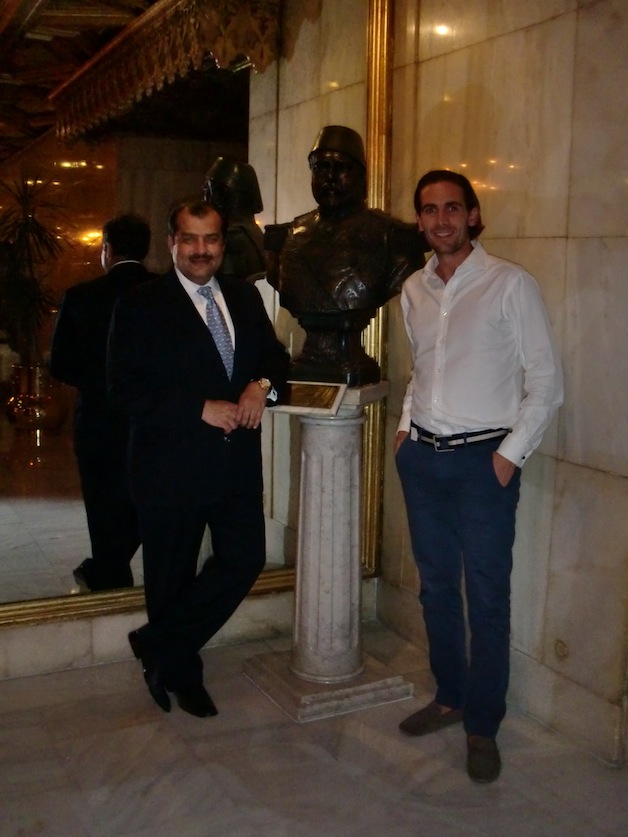 Being a part of the Mena House right now is the often quoted “honour and privilege, but in this case it really is” explains General Manager Mohit Nirula over a Bloody Mary in the Mamaluke Bar, the hotel’s amazing club style bar, lavishly ornamented and decorated and with a harp player setting the right mood. 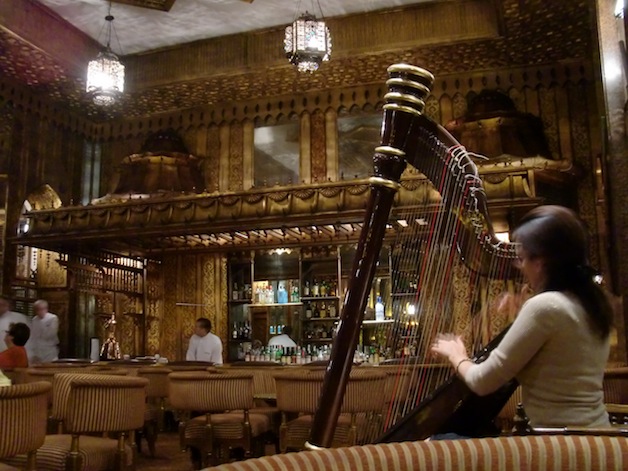 But he couldn’t be luckier, being in charge of “an over 140 year old property with 8000 years of hospitality experience (there are 800 staff with an average experience of 10 years!) as well as overseeing the USD 120 million renovation” to ready the hotel for the next century.

Do come and experience the Palace before it closes! And of course do come back to see it finished in 2012. Find out for yourself if the Mena House’s magic is owned to the 8000 years of Egyptian hospitality, the Indian charm Oberoi brought into the hotel since it’s taken management in 1973 or whether it’s the historic nature of the Palace itself. After two days at the Mena House I think I know the answer.