I often say it’s the smallest details making the biggest differences. So, not surprisingly during my recent trip to Dresden it wasn’t the impressive baroque architecture, the majestic Semperoper or the beautifully restored Frauenkirche that left the biggest impression, lovely though those are. In the end it was a cup of café latte over breakfast at the Kempinski Hotel Taschenbergpalais that I remember most.

Let me explain though: Dresden is simply beautiful. Due to its long history as the capital and royal residence for the Electors and Kings of Saxony, who for centuries furnished the city with cultural and artistic splendor, the city, and particularly it’s baroque and rococo city centre was known as a Jewel Box. It is one of those places with a magical, almost mythical touch to it. Some people probably won’t notice it but you can increase your chances by getting up early and exploring it on foot like I did. 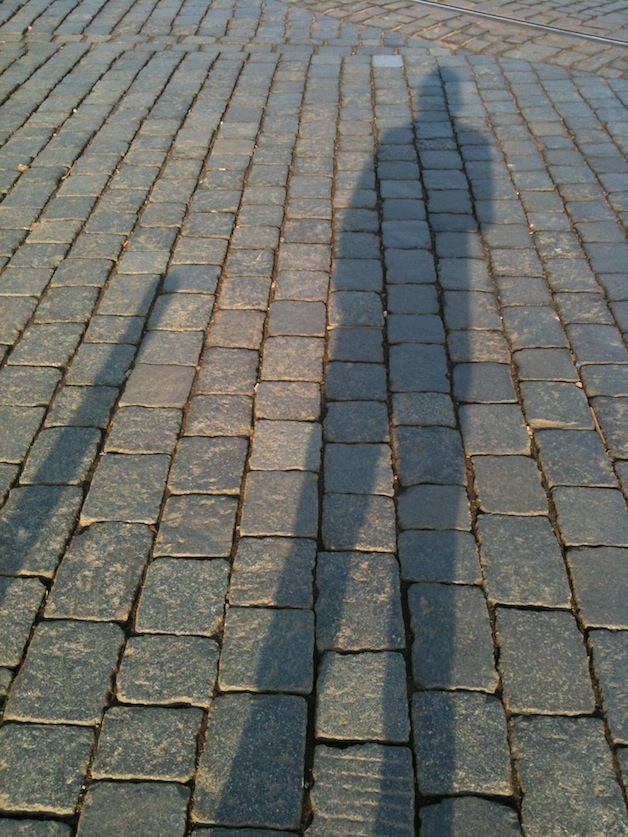 I woke up at about 6 a.m. on a Sunday and before breakfast embarked on a walk through the deserted streets. As I ambled over century old cobblestones, the first sunrays peeked through between the majestic buildings, slowly transforming long shades into shorter shadows, pushing out the mist left from a brisk, damp night and filling the crisp morning air with a little warmth. There were no cars, no trams; the usually busy pedestrian zone was empty and everything was still closed as I walked past baroque houses, the beautiful Semperoper and famous Zwinger. 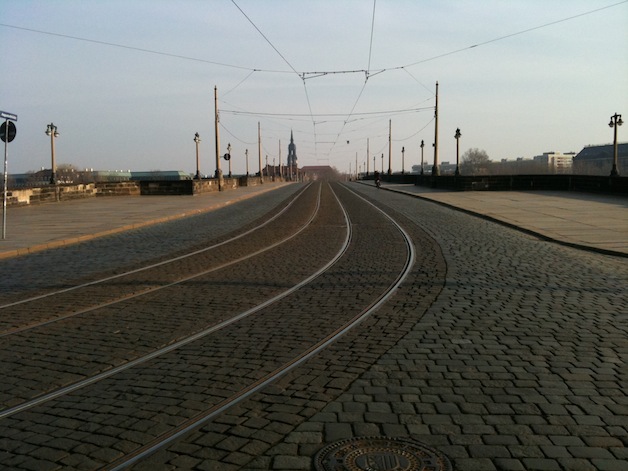 I crossed empty squares, filled with statues of past time heroes on horses, a few pigeons erratically teetering around, silently watched by ferocious chimeras luring down from church towers. 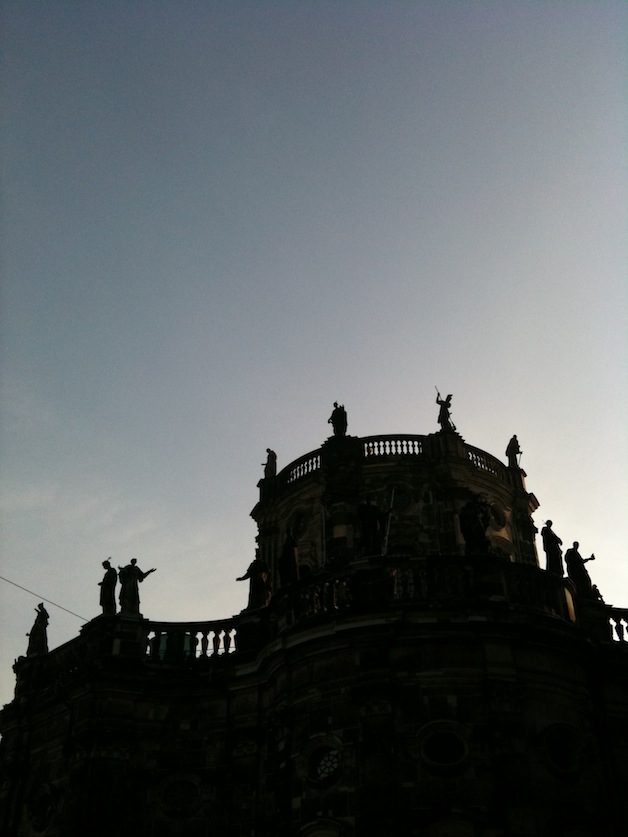 The silence was broken only by a cheerful couple seeming to make their way home from a rather long night out, her high heels click-clacking over the cobblestones mixed with a few chuckles as they joyfully carried on, his loose bow tie and her evening gown indicating an elegant soiree. Their approach scared off a few pigeons that briefly took off only to land again a few yards further as the couple disappeared in a small side street.

It’s quite extraordinary, considering that 20 years ago Dresden was still a ruin. After more than 90% of the city had been destroyed by allied bombings during World War II, it was left more or less in rubbles during the four decades of the East German socialist era and the landmark church ‘Frauenkirche’ was merely a sad pile of rocks, left in ruins due to a lack of funds for renovations.

After the German reunification in 1989 a master plan was crafted to re-develop the iconic baroque and rococo city centre, including the church’s 13-year renovation. Rebuilt rock-by-rock and piece-by-piece, the restoration was financed in part by the State of Saxony and in part by private contributions. Today it is once again Dresden’s dominating centerpiece.

I headed back to the Kempinski Hotel Taschenbergpalais, itself a beautiful example of renovated baroque architecture and conveniently located only five minutes away. As I reached Neumarkt Square, sunlight shone on the Frauenkirche like a spotlight on the crown jewels in a Sotheby’s showcase. I did make a donation for the renovation many years ago and understand one of the rocks in the church is ‘mine’ but with millions of them (only 8500 were salvaged from the original church and approximately 3800 were reused in the reconstruction) I wasn’t going to look for it. 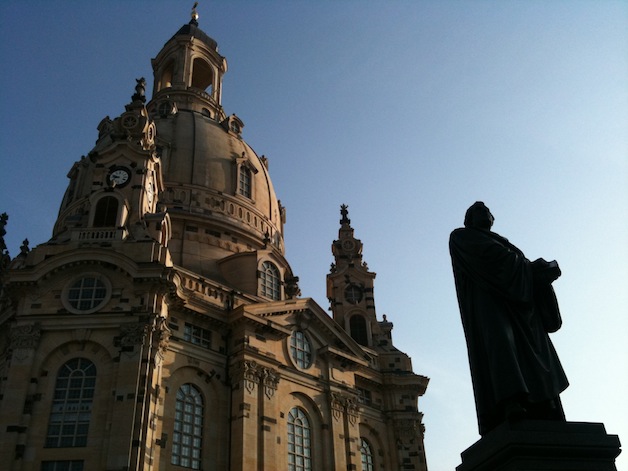 Instead, I headed back to the Kempinski Hotel Taschenbergpalais, itself a beautiful example of renovated baroque architecture and conveniently located only five minutes away. Dating back to 1708, it was commissioned by Frederick Augustus I of Saxony, nicknamed ‘The Strong’, as a city Palais for his girlfriend Anna Constanze von Hoym, the later Countess Cosel. It was entirely destroyed during World War II and essentially rebuilt from scratch in the 1990s to open as Saxony’s first five star hotel in 1995. Today it is THE place to be in Dresden.

Returning from my morning discovery, I headed straight to the breakfast restaurant where I was presented not only a fabulous breakfast selection and my favorite newspaper but also a surprisingly exquisite cafe latte. In times of Starbucks’ world domination and a seeming oversupply of baristas, you unfortunately still get rather poor coffees very often. This one, however, was just perfect: the right temperature, a giant cup, the right amount of milk and a perfect crème, served with a smile by a waitress addressing me by my name as she put it down in front of me, the sun now up on the sky, sending warm rays through the window. 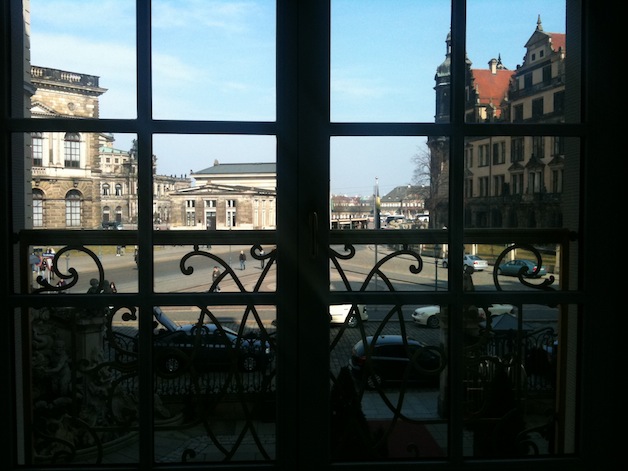 It was one of those rare moments where everything was just right and I forgot about the impressive sights I had seen earlier this morning. Jovially reading through my newspaper I ordered a second one later just to make sure it wasn’t a one-off lucky shot: yet again it was perfect. It was this small detail at the Taschenbergpalais that made a difference to my stay in Dresden. Today, months later, I still refer to this coffee as ‘the best I ever had’, one so good it’s worth returning to Dresden for.

And while you’re there you might want to go for a walk, too.