By now, many of you have probably been to Munich (if not – see my previous blog about the Heart of Munich) and you have hopefully been to Berlin. You may have even been to Frankfurt. But how about Wiesbaden? I’m guessing… probably not.

Why would you? You might be thinking. That’s exactly what I was wondering a few weeks ago and so I decided to spend a few days there. In the process of doing just that, I discovered that Wiesbaden is the perfect place for a weekend get-away.

Flying into nearby Frankfurt is easy from anywhere. And while Frankfurt is undoubtedly Germany’s financial capital, the city has far more to offer than just money-making schemes. In the interest of staying on topic, I’ll save Frankfurt for another blog… BUT, if you do spend a night there, stay at Roomers, the sexiest property the city has to offer. Apart from amazingly cool rooms, the hotel has a great Zen style Spa on the 6th floor – the perfect spot to unwind from all the hustle and bustle of the city. 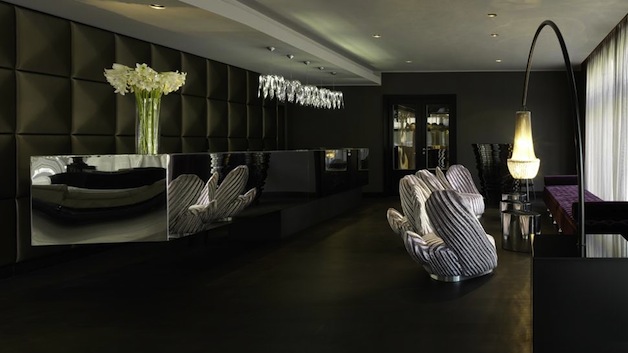 Let’s get on to Wiesbaden now, shall we? Half an hour by train or car, the often-overlooked capital of Hesse awaits, a fabulous destination to spend a long weekend away from it all. The moment you arrive, the hectic goings-on of financial Frankfurt seem light-years away.

Hidden within Hesse, Wiesbaden is one of the oldest spa towns in Europe, and its name literally means ‘meadow baths’. At one time, in fact, Wiesbaden had 27 hot springs. 15 are still flowing today, and these fantastic thermal springs date back to ancient times, when the Romans first documented their use.

Unfortunately, I wasn’t the first person with the ingenious idea to spend some time in Wiesbaden. By 1900, Wiesbaden – with a population of 86,100 – the city hosted 126,000 visitors annually. Throughout history, the springs have proved to be quite the hot spot for visiting celebrities. I wouldn’t have minded lounging around with Johann Wolfgang von Goethe, Fyodor Dostoevsky, Richard Wagner, and Johannes Brahms, who were all spotted at the springs from time to time. In those days there were more millionaires living in Wiesbaden than in any other city in Germany.

Of course, it’s no surprise that a beloved pastime like gambling would often follow bathing en suite – and in the 19th century, Wiesbaden was famous for both. Its Spielbank (Casino) rivaled those of Baden-Baden and Monaco.

In the heart of Wiesbaden lies the Hotel Nassauer Hof.  The perfect refuge for your getaway, this property has existed – under various aliases since 1813, occupying a prominent corner location of the town, facing the Kurhaus and gardens. 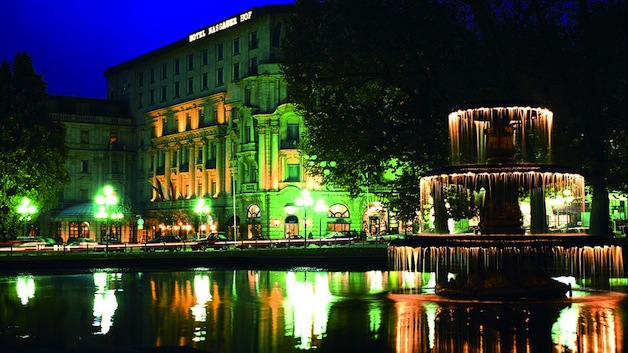 On my recent stay there, I started my day off with a sumptuous breakfast before heading out for a long stroll through the park. I decided to skip lunch one day because dinner had something very special in store for me… That said, in preparation for the delicacies that would be served at dinner, I headed up to the top floor of the hotel, where the Spa provides a tranquil relaxation zone. Most impressive, however, was the unique thermal water pool! 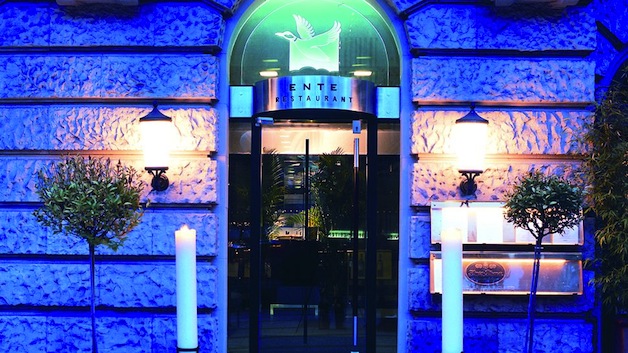 After an aperitif at the bar, I headed to the Michelin star restaurant Ente, which translates simply as ‘Duck’, which has been consecutively Michelin-starred since 1979. Now, I am a huge fan of duck, and trust me, the “Crispy fried duck from the oven with asparagus gnocchetti, peas and chanterelles (served in two courses)” was the best I ever had – simply amazing.

If there is such a thing as the perfect location in Wiesbaden, the Hotel Nassauer Hof is located in it. Overlooking the Kurpark or spa park, this is a wonderful area for walks. Of course, if you are in the mood to explore some of Wiesbaden’s other spas, the Kaiser Friedrich Therme is literally around the corner from the hotel.

Anyone and everyone would adore the Nassauer Hof. It’s a classic beauty with intimate service, friendly smiles and devoted staff everywhere. The wide corridors – covered with a mix of parquet and carpet – will welcome you warmly into one of the oldest hotels in Germany.