the countryside in the middle of edinburgh

Edinburgh is probably not the first weekend getaway destination that comes to mind as Londoners usually prefer the cosy Cotswolds over the Scottish capital. However, with just over four hours by train, Edinburgh is a great place to escape to for the weekend. Here’s how I spent mine, opting for a combination of city and countryside experience.

I arrived in perfect time for afternoon tea and there is hardly a better place in Edinburgh than The Balmoral, located just steps from the train station. Complemented by a glass of champagne, this was the ideal mood setter. 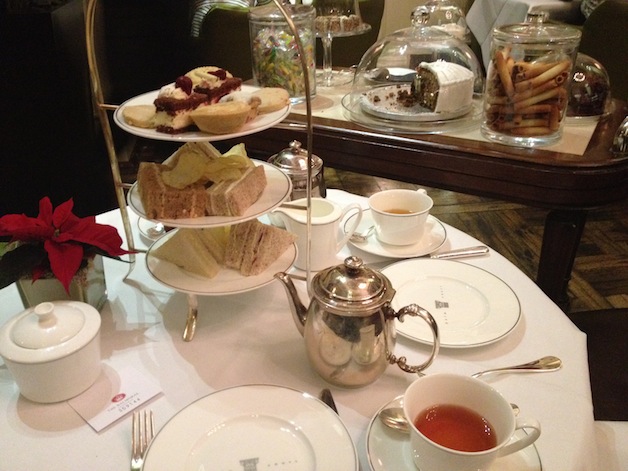 From the Balmoral it’s only a short taxi ride to my home for the weekend, Prestonfield. Surrounded by 23 acres of land it might not necessarily seem downtown Edinburgh at first glance but it’s less than 10 minutes from the city center to the hotel. Bordering the Palace of Holyroodhouse, HM the Queen’s official residence in Scotland, the views from the hotel are according: from secluded gardens and parkland to Arthur’s Seat (Edinburgh’s iconic hill), over the adjacent golf course and Royal Holyrood Park to the historic ruins of Craigmillar castle; Prestonfield is the countryside in the middle of the city.

First built in 1687 as the grand baroque home of Edinburgh’s first mayor, it has been a hotel since the 1950s. Bought and refurbished by the city’s leading restaurateur James Thomson in 2003, today it is the most discreet hideaway in Edinburgh and preferred retreat for international celebrities and aristocrats alike.

Opulent decor and flamboyant eccentricity draw you into the main building and towards the Reception Room, but it is the many little rooms and salons I find the most fascinating. With real fireplaces in each of them it is tough to choose a favorite: the Yellow Room with its black crocodile sofas? The Whisky Room with its quirky antler furniture, deep sofas and even deeper glasses of Malt whisky? The Leather Room, lavishly paneled with gilded 17th-century leather from Cordoba? The baroque Tapestry Room, created by craftsmen working on the nearby palace of Holyrood House in 1687? Each have their own unique character and are perfect to spend cold, windy afternoons by the fire.

I was taken to my room by Derek, a cheerful Scot dressed in a dapper black kilt. If only more hotels had a Derek at their disposal! Authentic, attentive, anticipative, all the adjectives hoteliers like to use when describing their service philosophy – this man has them all. On top of that he never seems to rest as I spot him almost every time I am in any of the hotel’s public areas.

My room was opulently decorated with lots of tapestry, hearty red and earthy brown tones, resulting in a romantic charme with a touch of boudoir. Apart from usual amenities there were several personal touches: a cookie jar next to the bed was a welcome surprise for my sweet tooth and the fact that instead of a glass of milk it came with a bottle of champagne made it perfect.

After a great night’s sleep I woke up to a fascinating sunrise over the estate; the morning sun painting Arthur’s Seat into a stunning golden light. In the restaurant, breakfast had a great choice of fresh fruit and berries, mueslis, compotes, cornflakes and yoghurt, which I followed up with delicious eggs benedict.

With the sun peaking through the clouds I donned the Wellies (well, Timbos really) to visit Prestonfield’s impressive highland cows and sheep, explore the adjacent bird sanctuary and continue my way towards Edinburgh. 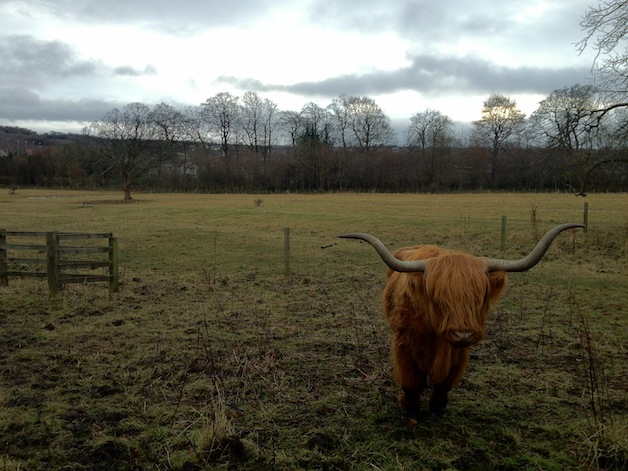 My afternoon stroll lead me up the Royal Mile to Edinburgh Castle and the nearby National Museum of Scotland, which – apart from exciting exhibitions – also features a great lunch option: located on the fifth floor is Tower, the city’s first rooftop restaurant. With stunning views of the castle and city skyline on its menu, Prestonfield’s chic downtown cousin also serves a delicious Sweet Corn and Mussel Chowder (it was so good I actually forgot to snap it). 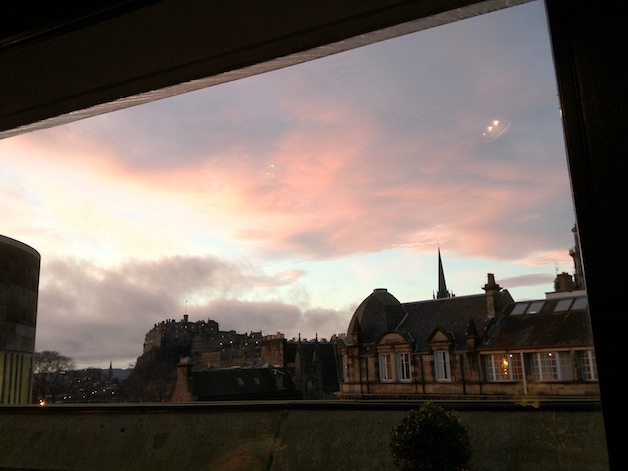 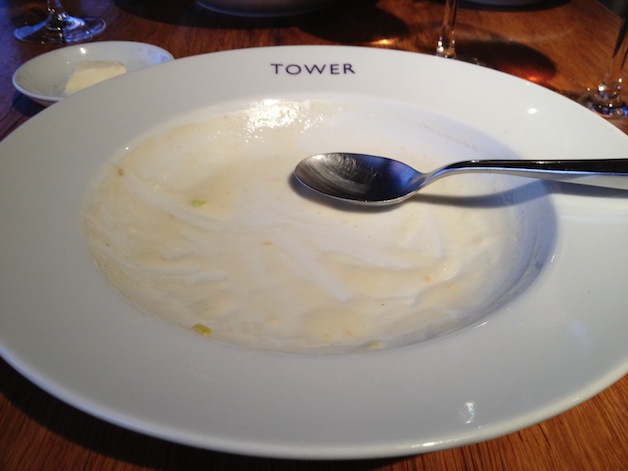 After lunch I walked back towards Princes Street to explore the German Christmas market with its roller coasters, bratwurst stands and beer stalls (is that really what people think we do for Christmas in Germany?).

I made my way back to Prestonfield, where it was time for fireside cocktails in the Yellow Room. Dinner tonight was at the hotel’s two rosette fine dining restaurant Rhubarb and I chose the highly recommendable Hand-dived scallops (supplied by Guy Grieve’s Ethical Shellfish Company) with cauliflower purée, chorizo, apple and truffle dressing and confit lemon as a starter, followed by a delightful Breast of pheasant with black pudding and pancetta, confit leg and chestnut pithivier, sherry-braised lentils, parsnips and sprouts as a main. The dessert, most important part of any meal (to me anyway!), was a divine Vanilla mille-feuille with caramelized bramley apple, cranberries and Calvados chantilly.

The next morning another of Prestonfield’s great staff, Rod, awaited with the Range Rover to take me to nearby Dalhousie, a 700 year old castle nestled into Scotland’s beautiful countryside. 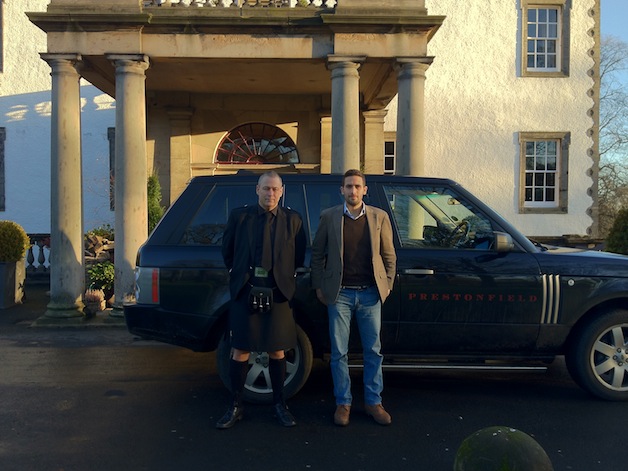 Dalhousie is home to Falconry Scotland. With over 25 birds of prey on display, including owls, merlins, kestrels, falcons, buzzards, hawks, a raven with a TV career, and a majestic 31-year-old Tawny Eagle called Ziggy, the falconry centre offered a range of activities to get a close up with these amazing animals. Guide Tessa took me out onto the castle grounds where I got to fly Isobella, a stunning Harris’ Hawk. An incredibly versatile flyer, able to soar and glide over open ground as well as weave quickly and with great agility through the forest, Isobella shot down from her perch in the tree to gently land on my gloved arm. 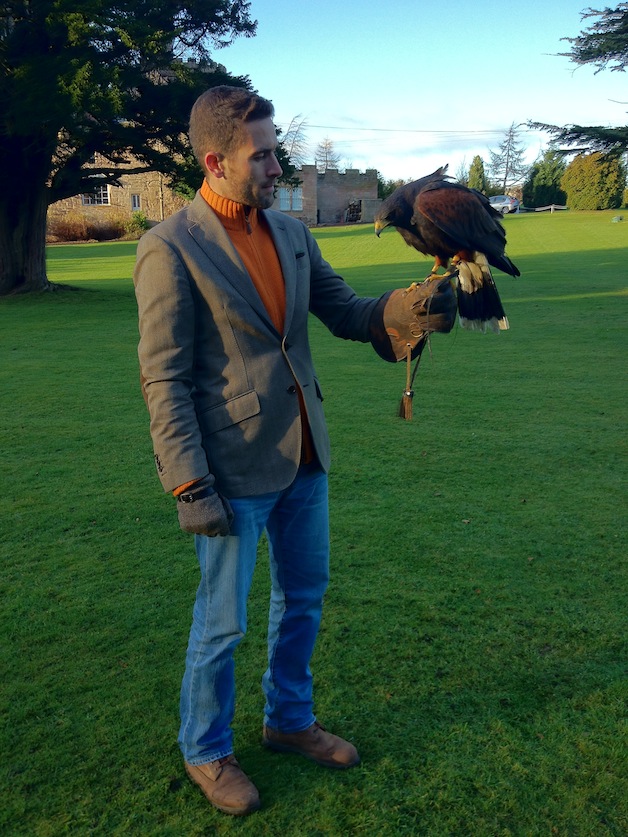 I also got to meet Duke, the impressive Turkmanian Eagle Owl. With its enormous wingspan, he sailed gracefully just inches over the ground, his striking eyes focusing on my glove, raising only a few feet away to perform a precision landing on my arm. His grip was firm, after all his talons are capable of crushing with over 200 pounds of pressure per square inch, allowing him to hunt foxes and even small deer. With just one flap of his wings he rose back up into the tree, only to come back for another bit of meat moments later. 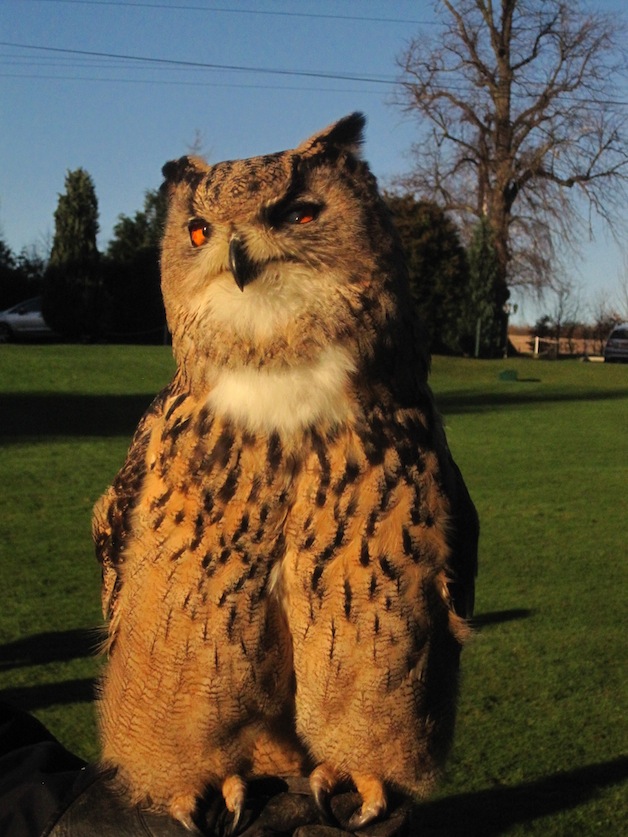 I could have done this all day, but unfortunately it was time to head back to Edinburgh to catch my afternoon train to London. The weekend seemed to have flown past faster than Isobella, the Harris’ Hawk but it was just as versatile.

It’s rare to come by the countryside and the city within the same hotel, it’s the best of both worlds to me. Prestonfield is one of those rare finds. Forget the Cotswolds!