There are two types of people in ski resorts, there are those who spend every minute on the slopes and then those who will only be on the runs if the conditions are picture perfect, who like to take it easy, enjoy their hotel and relax. (Ok, a few people probably will do a bit of both, but for now let’s pretend there are only two categories).

Personally I never understood how people could waste their time in a hotel when there are slopes to enjoy… As you can tell, I definitely fall into the first category!  Pushing my friends to get up early, rushing through breakfast and heading early to the slopes so we’re on the first chair lift up – taking advantage of the morning, when it’s still rather quiet and the fresh snow is all mine!

I grew up skiing and when I still lived in the South of Germany it was fairly easy to throw your gear in the back of the car and drive to the mountains every weekend.  Today I still try to go skiing as often as possible, but when you live in London it is slightly more challenging to coordinate a trip to the Alps: there are flights, trains and/or rental cars involved and time is obviously also an issue.

But when the idea of a ski trip with my team came up I was the first to say yes and started planning. It was still fairly early in the season so we needed a place that had enough snow already. Immediately I thought of my old favorite, a resort you can be sure to have snow: Lech am Arlberg in Austria. Often referred to as the Aspen of Austria, Lech is nestled in an altitude of over 4700 feet (1500 m) and known not only for it’s understated glamour, elegance and chicness but for great skiing on nearly 300 km of slopes for all levels of skiers. It is a retreat for celebrities and Royals alike, praised for its flair and privacy, variety of ski runs as well as après ski and dining options. You get to Lech by flying into Munich or Zurich or Innsbruck and then either driving or taking the train or a helicopter.

When we arrived from Munich by car in the early afternoon the weather was just perfect: the cold winter sun shining onto powdery mountains that had received a dump of snow just two days earlier. We drove up to our hotel, the Aurelio, a fairly young property in this traditional small village, which has maintained its size over the decades through tight building laws.  No new buildings were constructed, but some existing ones transformed into hotels, whilst other ones have been expanded and renovated, thus allowing Lech to maintain it’s Alpine charm. This controlled development also resulted in Lech winning the European Entente Florale Award for ‘Most Beautiful European Village’ in 2004. 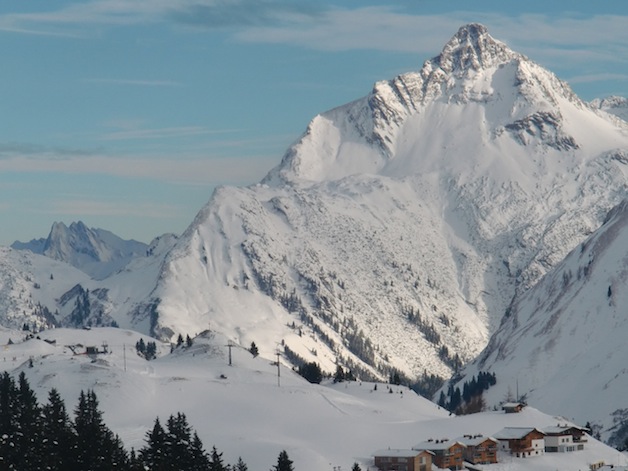 I rushed into the Aurelio to check in, aiming to take advantage of the remaining afternoon on the slopes, but immediately realized that things are very relaxed here: with only 19 rooms and its subtle entrance the Aurelio is different to other hotels, in fact it’s chalet rather than hotel. As you arrive you are welcomed in a salon other hotels would refer to as a lobby; the Aurelio’s Licca Lounge is more like a living room.  On arrival you settle next to the fireplace, soak up the atmosphere and enjoy a glass of champagne. The ambiance is fantastic, modern Alpine chic combined with great traditional details. This ‘modern meets chic’ philosophy seems a major driving force behind the Aurelio’s design and materials all appear influenced by natural elements such as wood, rough rock, calming colours and textiles. The walls throughout are decorated with over 500 oversized photographs by acclaimed photo artist Tim Hall, depicting Lech, its skiing and the nature.

We finish our champagne and are shown to our spacious and elegant room, which features wooden floors, high ceilings, lots of cupboard space and a fabulous black marble bathroom. By the way I am not the only one who likes the bathrooms, otherwise the Aurelio would have not won the European Hotel Design Awards for ‘Best Bathrooms and Bedrooms’ when it opened in 2009!

Due to it’s raised location on the mountain, embraced by the slopes on both sides, all rooms have stunning views over Lech and its dramatic Alpine backdrop. But still it’s close enough to the main road, where horse drawn carriages take people through the village and you can even hear the bells around the horses’ necks ringing in the distance. I step back inside from my balcony and change into my ski gear, the initial rush gone as the place releases its soothing vibe, but there is still time to do a few runs before the sun sets.

So we pick up our skis from the ski room in the basement, go out onto the terrace and ski right down to the Schlegelkopf lift station. Lech offers great skiing; there are easy slopes for wide carving swings as well as challenging offpiste and forest runs. The Rüfikopf is a haven for free riders and the ‘White Ring’ runs connect Lech with neighbouring Zürs, allowing you to do a full circle back to Lech. If you’re not too sure about your skills or want to get back into shape, the Lech ski school is at your disposal with over 250 certified instructors. 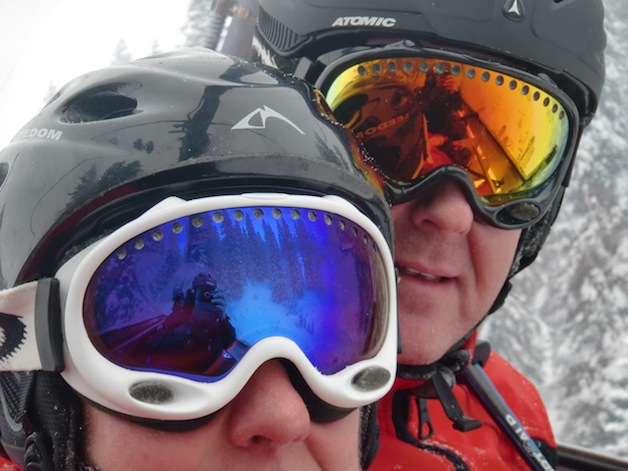 We managed to get some great runs from the Kriegerhorn and returned to the Aurelio by sliding right in front of the ski room, which opens with your room key (which also conveniently serves as your ski pass).

On the way up to our room we pass the Spa, an elegant and minimalist 1’000 sqm zen zone with heated lap pool, steam bath, two saunas and jacuzzi. Usually I’d spend an eternity here, but after only a few hours on the slopes I only did a few laps in the pool and helped myself to some fresh seasonal fruits and tasty Austrian Carpe Diem drinks from the Spa’s complimentary Vital Bar.

For dinner I highly recommend “Aurelio’s”, the hotel’s fine dining restaurant, offering an à la carte menu of traditional and modern Austrian specialties as well as international dishes, complemented by the wine cellar’s extensive list of rare and vintage labels. For later they have a fine range of aged brandies and Armagnacs, some more than 100 years old.

After dinner it’s back into the ‘living room’, a place offering both privacy and the opportunity to mingle with friends and other guests. Although Lech offers great après skiing and a vibrant nightlife, for the first night we don’t go anywhere else. But as cozy as the living room is, the temptation of the fabulous bed in my room is enormous, and when I finally fall into it it only takes me a second to go to sleep.

As I mentioned before, I like leaving the hotel early and being the first to hit the slopes, but not at the Aurelio, where the atmosphere is perfect to unwind, relax and take things slowly. As I wake up in the morning, I step out onto my balcony, soak up the fresh Alpine air, gaze over the valley and notice the first skiers on the slopes already passing the Aurelio’s terrace. However for the first time I am not upset that I’m not amongst them, but instead casually make my way down to have breakfast.  Realizing, with a wry smile on my face, that at the Aurelio I don’t mind being part of the second category of skiers, I was enjoying my every minute inside this fabulous hotel.