why you should go to zurich 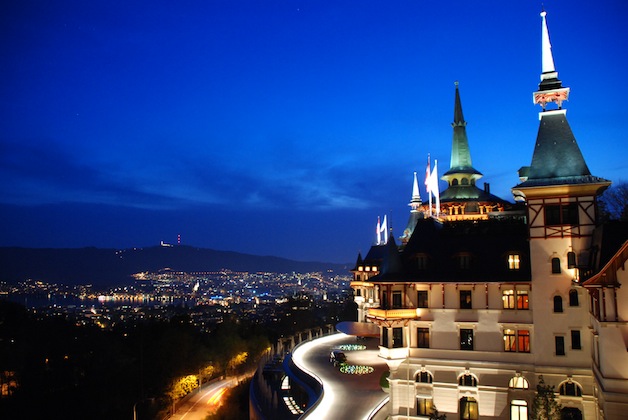 I love Zurich! But if you’ve never been you probably wonder why you should go in the first place?

Despite Zurich Tourism’s endless efforts to promote the city as a leisure haven it is – similar to Frankfurt – still widely suffering from a perception of being a rather corporate city, a hub for financial institutions and art dealers primarily.

Since banking is not so much of interest to me that it would inspire me to travel (“And on the left hand side, ladies and gentlemen, the headquarters of UBS.”) here are my reasons why I love going to Zurich every so often and why you should, too.

Few seem to know that Zurich has been recognized as the city with the best quality of life for 9 years straight. You don’t get that for no reason and I believe it’s the unique mix of tradition and modernity that gives this city its edge, whether its in art, handicraft, fashion, culture or lifestyle.

Let’s look at the art scene first: there are over 100 art galleries in Zurich, featuring anything from the old masters to contemporary and modern art. For a comprehensive overview visiting an exhibition at the Kunsthaus should be on your agenda while you’re in town. Then of course there is the wonderful Bahnhofstrasse, the main shopping street offering anything from Armani to Zegna and of course the world famous Swiss chocolates at Sprüngli!

In the summer the city’s lake is amazing for swimming, picnicking and sunbathing, so plan for a lakeside stroll (notice the Henry Moore sculpture near the Chinese Garden if you are down there. And if you visit in the winter: try ice-skating!). To round it off, Zurich features a fantastic range of restaurants with great options for Michelin stargazers and Gault Millau point collectors, only to be complemented by over 1’000 bars and a multitude of clubs you don’t want to miss. And the best thing is: you can do most things on foot. Otherwise I suggest the city’s award winning public transportation system, voted among the best in the world, drawing traffic planners from around the globe to study the fabulous tram, bus and train network (Swiss watches are actually set on the train schedule. No, not really, but both run with the same meticulous precision).

But what if you just want to chillax for a weekend and enjoy all of the above without running around? Simple: you visit the Dolder Grand.

Located just 15 minutes from Zurich airport (which, on a side note, was voted Best European Airport in 2009), the Dolder Grand is nestled up on a hill, surrounded by la lush forest and away from, well, you can’t say hustle and bustle really because there is no hustle in Zurich. Or bustle. Zurich is quiet and peaceful compared to other major cities and the Swiss have a word for it: überschaubar. The word doesn’t have an English equivalent but the best way to describe it I guess would be to call it ‘manageable’. Literally it means ‘overseeable’ as in easy to keep an overview, yet it’s a Weltstadt, a world city. I shall call it a metropolis, although with only 460’000 residents it probably is the smallest in the world.

Coming back to the Dolder Grand, rising up on a serene hill, with a cinematographic panorama overlooking the city with its tranquil lake and dramatic mountain range as a backdrop. It’s a historic building with a modern touch, legendary architect Sir Norman Foster’s touch in fact, who added two radically modern wings to the traditional turn-of-the-century Swiss style main building. It’s Foster’s first hotel and wow, what a hotel it is. It’s the essence of everything that is Zurich, fusing history, modernity, art, gastronomy, culture, fashion, wellbeing and nightlife into one sexy place-to-be.

On the art side, apart from the building itself being a masterpiece, it is decorated with a meticulously curated collection of art that fills a 19-page-and-growing catalogue: as you arrive on the main drive way you are greeted by Barry Flanagan’s Leaping Hare on Curly Bell, as you are escorted inside by a friendly, brown caped Doorman you make your way past artwork by Claude-Joseph Vernet, Robert Motherwell and Miguel Barcelo; and this is just until you reach the Front Desk. The restaurants feature Salvador Dalí, Damien Hirst, Gerhard Richter, and Max Bill (only to name a few); the Golf Wing’s airy Lift Lobby presents an installation by Joachim Fleischer, whose robotic light arms will make you not want to get out of the elevator. There is so much more to be discovered, do the tour yourself and you can skip the Kunsthaus. 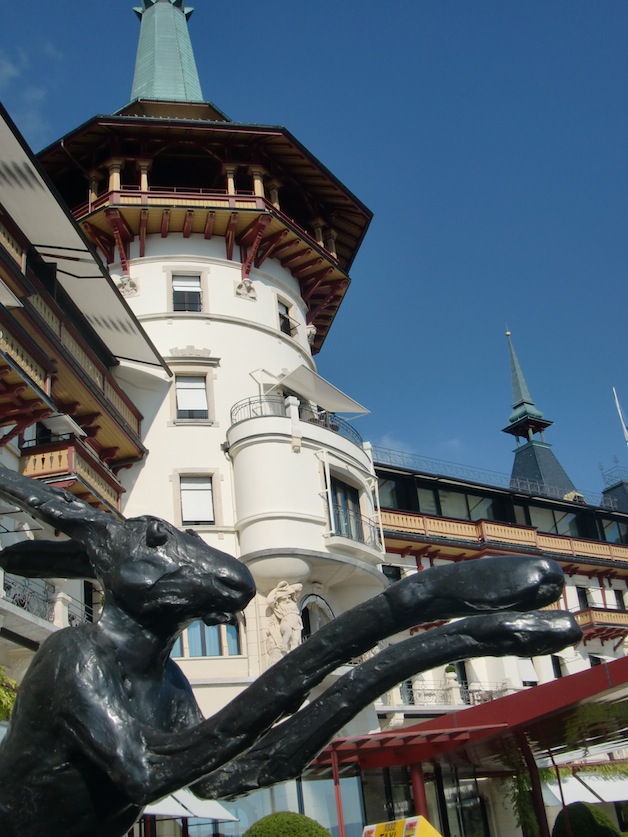 The uniforms at the hotel play an important role as I notice while being escorted to my room. During the four-year, CHF 450 million rejuvenation, as the hotel rid itself from the dust of the old days, as it morphed from hotel to city resort, it injected a fresh approach to its staff uniforms as well. Uniforms are modern and slim cut, there are no ties. Doormen wear capes, Garden Restaurant staff sport pink shirts and sneakers, Spa employees quietly move around in holistic yoga suits. General Manager Thomas Schmid explains how the uniforms “set the mood for guests to realize they are not in a stiff city hotel but a modern city resort, a destination for leisure and business guests alike. The hotel radiates this modern atmosphere and stimulates guests to adopt to it”, he continues. “We don’t want to be super cool but create an atmosphere that is modern, yet inviting and approachable.” It seems to work: the majority of guests are smart-casually fashionable, adding to the scene with the exception of two tied up gentlemen enjoying their afternoon tea in the Lobby Lounge. Schmid smirks, realizing that he’s making a rare appearance in a tie today but excuses it with a formal gala event happening at the hotel later on. At the end of the day, you dress how you want here but the atmosphere stipulates a certain outfit anyway.

My Junior Suite is fabulously modern, light, and airy. Lots of organic shapes, curved walls and white (!) de Sede sofas. No distractions, only the curtains add a subtle touch of color, contrasting the dark wood floor, an elegant orchid set on the Minotti coffee table. With opulent views outside, there is no need to overload the rooms inside. 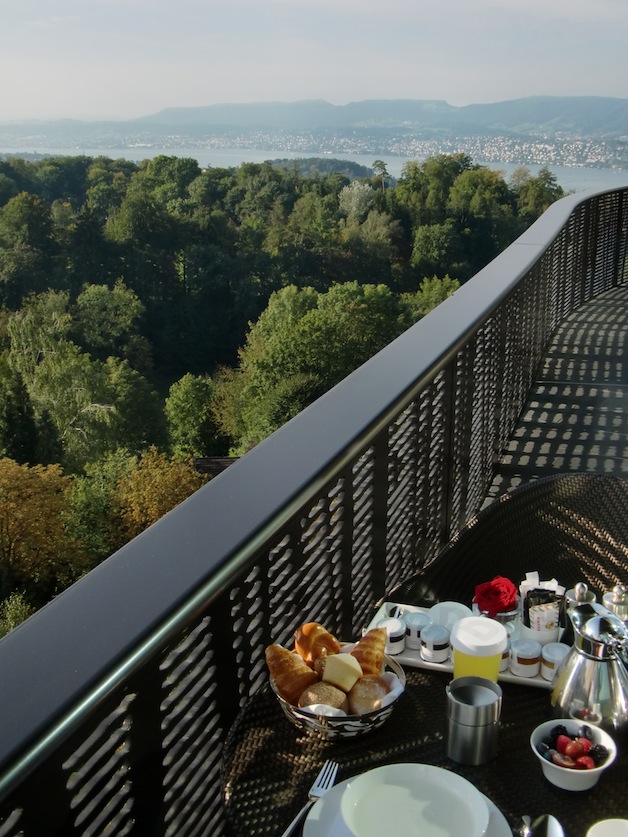 Too much art can be exhausting and so I make my way down to the 4’000 square meter Sylvia Sepielli conceived Spa (more art there by the way!) where your choices range from a -15 degree snow chamber to a +90 degree sauna, from an enormous indoor pool to three outdoor whirl pools with infinity views over Zurich. The Spa is a journey of it’s own as you follow the spiraling black granite ‘river’ coming from the most intimate of rooms, the meditation chamber with it’s mirror mosaic cupola. Forget the lake!

Also forget picnicks, instead make time for The Restaurant where Michelin starred chef Heiko Nieder and his equipe will make you forget any other restaurants in the city! Try the five course amuse bouche menu for a surprising cross-section of the menu; if you prefer to go á la carte I recommend the ‘Turbot with oyster, apple and gorgonzola’.

Fancy a drink after dinner? The Dolder Grand Bar is undoubtedly the sexiest bar in Zurich and thus not surprisingly a local hot spot: black lacquered walls, custom made black de Sede leather furniture, floating (!) Swarovski candles above your head and a selection of rare and vintage vodkas. Need I say more? Other than the fact that there is more art here: Jani Leinonen’s ‘We Love Vodka and Freedom’ gets you in the mood for the bar’s excellent Mongolian Grand Khaan Vodka based signature drink ‘Wasa Khaan’.

The night I was there the bar hosted the legendary ‘Night at the Grand’, a regular event attracting Zurich’s hip and trendy scene. The party turned the bar into the city’s hottest location for the night so why bother going anywhere else.

The next day, after an amazing brunch on the terrace I decided to leave the hotel for a quick stint into the city after all. This is where the Dolder Grand’s latest added value comes in handy: a complimentary Mercedes E class convertible. Waiting for you on the driveway, you cruise off in style. I chose the scenic route, first through the forest, then around the wonderful lake and finally through the city. There is no need to stop anywhere since you had everything you came to Zurich for at the Dolder Grand. 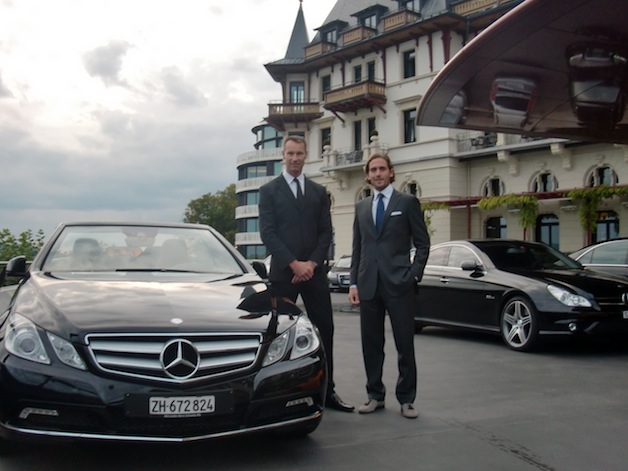 Well, that’s not entirely true. Although a box of fresh chocolate truffles welcomed me in my room, it was by far not enough to satisfy my daily fix so I pit stopped at the Confiserie Sprüngli on Bahnhofstrasse. Best known for its variety of chocolates I came for one thing only: Sprüngli’s trademark Luxemburgerlis, delicious mini-macaroons with even more delicious fillings. But while you can find macaroons almost anywhere, you have to go to Sprüngli for Luxemburgerli. And I would go there even if Lord Foster built a Sprüngli shop into the Dolder Grand and sold them there himself!